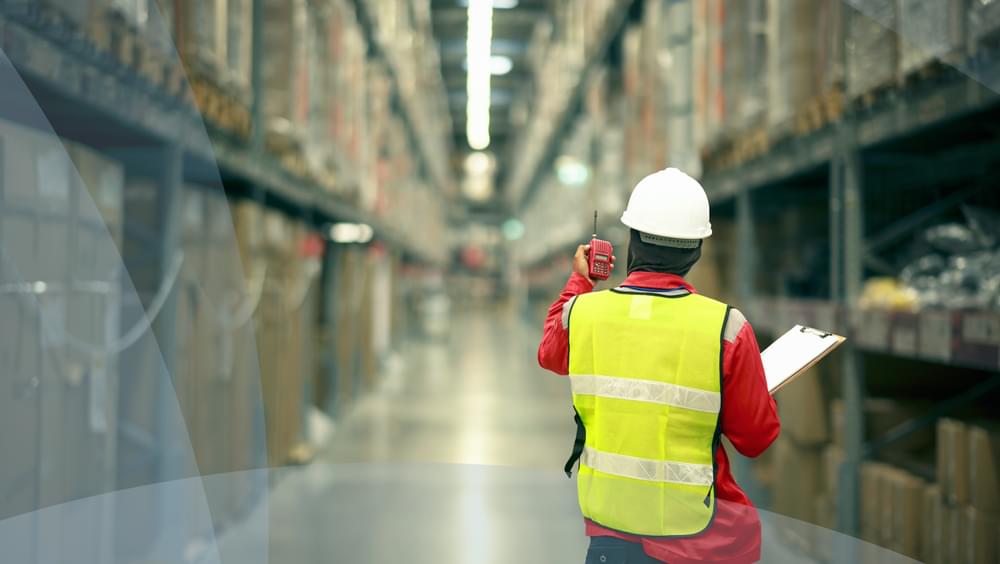 The rise of onmi-channel retailing (i.e. the selling of products across all channels – both online and offline) has placed a heavy strain on the UK’s warehousing sector. Consumer demand for greater choice and speed of delivery has put operational pressure on logistics. To keep up, warehousing and distribution centres have had to adapt their management systems and become more efficient with their space.

A recent analysis by United Kingdom Warehousing Association (UKWA) and Savills found that there are over 1,500 individual warehouse units in the UK that each provide more than 100,000 sq ft of space. This amounts to just under 424m sq ft of warehouse space that is being used for storage and distribution [1]. However, the combination of UK-wide supply for space falling for a seventh successive year along with the steady growth in demand for omni-channel retail fulfilment, means there is pressure to do more with less [2].

Logistics and supply chains have evolved

Distribution centres and traditional warehouses are very different beasts. The former comprises an integrated logistical network, primed to distribute goods in the most efficient way possible. Warehouses, on the other hand, adopt traditional supply chain values, i.e. they are set up to stockpile huge quantities of every product that might be shipped out months after arriving.

Supply chains have now evolved, working on the principle of having the required quantity of the right product in the right place at the right time. To achieve this, you need more than just a warehouse to store products. You need value added services such as product mixing, order fulfilment, cross docking and packaging amongst other things.

The customer-centric model that new distribution centres adopt make the logistical operations much more complex than warehouses as they have to process, manage and transport orders. As a result, space requirements have changed too.

The Daventry International Rail Freight Terminal (Dirft) near the M1 in Rugby is ideally positioned, allowing products to be delivered to 85% of the population of Great Britain within four and a half hours (the maximum time an HGV driver can travel without taking a break).

Most of the recent big box developments have been taking place in the South Midlands from Milton Keynes up to Lichfield and Coventry with good access to M1 and the eastern ports. There are also a number of large schemes to the east of London already constructed and several schemes currently planned around the M25.

Space is a major constraint for larger units and the complexity of the available sites for large units now means that the extent of associated infrastructure works can be very significant.

There are a number of sites where the logistics have been linked with intermodal rail freight terminals. However, this seems primarily to be a mechanism for obtaining planning consent by creating a case for taking freight traffic off the road. It is questionable whether or not occupiers really have demand for rail served units.

These land-hungry ‘big box’ sites sit in parallel with smaller edge-of-town units, but such facilities face space constraints. The need to locate these units near densely populated centres means there is stiff competition from higher-value developments, primarily residential.

Use of space certainly needs to be optimised efficiently and this will inevitably require closer collaboration between logistics shell designers, constructors and automated system providers.

Interactive and mobile technology, big data and Internet of Things (IoT) will all have a role to play when building the warehouse or distribution centre of the future. Space will need to be flexible and easily adapted so that it can evolve with technological advances.

The space requirements of medium to large hubs, which see order picking and sequencing from stock, are likely to be driven by automation systems. This will in turn determine things such as vehicle flows and site layout. Such spaces will be well suited to a modular design and construction.

For re-distribution fulfilment centres, which have little or no inventory, there is even greater scope for automation. Autonomous retrieval and robotic picking will mean that the buildings will have a more complex interaction with the internal components, and will therefore need to be more bespoke.

Multi-level logistics units are now being looked at by many parties. Quite a few are being planned but only a handful have been built so far. The first multi-storey warehouse was built by SEGRO in 2008 - the X2 at Hatton Cross, Heathrow, and offers full lorry access and loading on both levels.

SEGRO is now planning an even larger multi-storey warehouse in Enfield and Gazeley are on course to complete a 426,000 sq ft three-storey warehouse by the end of 2019 in Silvertown, East London. The building will be used as a ‘last mile’ logistics hub for London and surrounding areas, targeting eCommerce, distribution and logistics customers.

Multi-level logistics unit sites being looked at now tend to be closer to cities where upper level service yards can be constructed, such as have been developed in the far east in places such as Hong Kong and Singapore where land is at a premium.

In the UK, tenants initially resisted the idea of multi-level units, citing worries that global parcel operators aren’t used to operating in this way. This makes it extremely hard to fund the cost to build.

Proposals do currently exist for schemes within the M25 boundary with up to three levels. The constraints of column interrupted space rather than having clear spans does create an element of caution in terms of investment value and likely tenant uptake of such units. However, where there is little other choice, such as inner-ring urban areas, multi-level units make an awful lot of sense. However, it is unlikely we’ll be seeing these pop up in areas that are well served by motorway junctions.

Amazon owns different, strategically placed warehouses for particular kinds of products. Their warehouses move closer and closer to main metropolitan areas and city centres, and their inventory is spread amongst them to ensure that supply can meet demand. These optimised warehouses use pick-and-pack robots that begin processing orders almost instantly.

Amazon’s Tilbury warehouse is a four-storey distribution centre with a height of 70 ft (21.3m), offering 2.2m sq ft. The shed features concrete mezzanine floors structural to the building, designed so that the upper floors can be removed should another tenant occupy the site in the future.

Amazon’s take-up for 2017 was 4m sq ft – five times as much new warehousing space as its next fastest growing retailer, Lidl, who took 754,000 sq ft. Amazon is now looking for 2.2m sq ft to develop additional four-storey warehouses in the Midlands and North-East of England.

The move towards next day delivery has suggested there would be smaller units peripheral to towns which could serve this demand. These Urban Logistics Centres (ULCs) or Urban Consolidation Centres (UCCs) could help with the ‘last mile’ challenge – typically the most costly and least efficient part of the logistics process.

However, ULCs are often seen as being too expensive and there is limited evidence that proves their efficacy one way or another. However, in their 2017 report [3], the Independent Transport Commission indicates that Transport for London (TfL):

“...actively supports and promotes all forms of consolidation, including through joint or bulk procurement, but has yet to find a consolidation centre that is both self-sufficient financially while also delivering environmental and efficiency benefits. At present, UCCs rely on public subsidy through grants, EU awards, or local authority assistance in order to be viable.”

It is vital that efficiency gains offset the high real estate costs in urban markets. To make these urban logistic sites viable, we may see a greater use of shared service models whereby many sellers share the same facility to consolidate their products for delivery.

With growing demand and limited stock driving up rents for urban development plots, it’s also likely that built-up areas such as London will see more re-purposing/upgrading of older stock. ‘Beds and sheds’ is another concept that has been touted, combining residential and industrial occupiers next door to, or even on top of, each other. An example of such a mixed-use scheme can be seen in King’s Cross, where Travis Perkins has tied up with Unite to provide student accommodation above one of its warehouses.

In the meantime, it appears that last-mile capacity is being served out of existing bricks and mortar retail premises, which themselves are serviced by larger logistic units.

Future demand in light of Brexit

Whilst it remains difficult to see through the foggy Brexit negotiations, there is a risk that a no-deal outcome could translate into a greater demand for warehousing and distribution space. Supply chain pressure may result from trade restrictions in the short to medium term as higher levels of inventory would need to be stockpiled in the UK to hedge against a possible hard border. In this scenario, we could see a rise in the number of logistical development projects to either create new or expand existing space

Bonded units, effectively storage zones that allow goods to be stored without payment of import taxes before they are shipped to consume, are likely to see greater levels of demand if the UK crashes out of the Customs Union.

Regardless of the outcome of Brexit negotiations, one thing is clear, warehousing and distribution centres are in demand, and the structural change driven by e-commerce will continue to benefit the market. Land price pressure, urban transport congestion and the rise of same and next-day delivery are just some of the forces driving demand for new logistical solutions such as multi-storey warehouses.

[3] How can we improve urban freight distribution in the UK? Challenges and Solutions (May 2017)